Why are some nights darker than others

A mystery for centuries: even in the past, people sometimes observed a diffuse glow that turned night into day. But researchers have only now clarified what causes these “bright nights”. Accordingly, neither polar lights nor solar storms are to blame, but a rare increase in the "airglow", the diffuse radiation that excited gas particles in the upper atmosphere give off after sunset.

The phenomenon of "bright nights" has been known since ancient times: Pliny the Elder described it as "a light that shines from the night sky and turns night into day." diffuse, slightly greenish light. This is bright enough to be able to see the landscape even on a moonless night and even read a newspaper, as eyewitnesses report.

"The historical records of this phenomenon go back centuries - and the descriptions all match," explains Gordon Shepherd of York University in Toronto. Accordingly, this diffuse night light is rare and can only be seen on moonless nights. Its brightness seems to increase towards the horizon. 26 such “bright nights” are historically documented, as the astronomer reports.

However, there are no such reports from the present. The reason: The almost extensive light pollution by humans brightens the nights so much that this natural phenomenon is drowned out in the scattered light. "Because of that, you just can't see it anymore - even though it's still there," says Shepherd.

Neither polar light nor solar storm

But what causes this glow? At first, researchers suspected a connection with solar storms or polar lights. However, more detailed analyzes showed that the bright nights do not occur more frequently during periods of strong solar activity than during relatively solar rest. In contrast to the northern lights, there was no evidence of any increased magnetic activity in the atmosphere during these events.

But what is the reason then? To find out, Shepherd and his colleague Youngmin Cho used data from the Wind Imaging Interferometer (WINDII), an instrument mounted on a NASA satellite that records the light emissions from particles in the atmosphere. 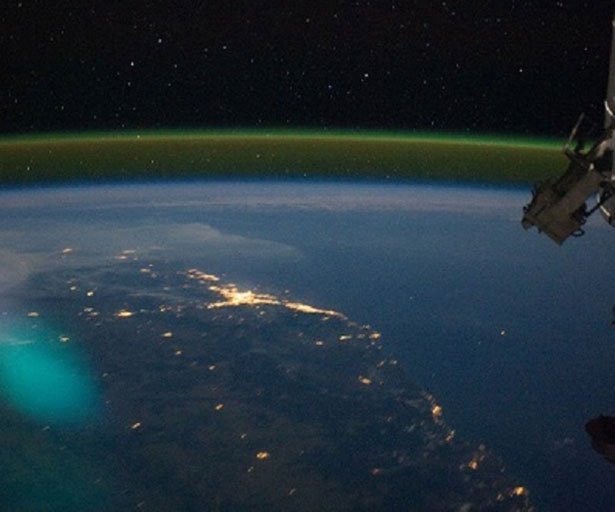 Overlapping of gravity waves in the atmosphere can intensify the airglow ten times or more. © NASA

Is the airglow to blame?

Her suspicion: The bright nights could be a locally enhanced version of the so-called airglow, a greenish shimmer of the upper atmosphere visible from orbit. It occurs because the daytime solar radiation excites the gas particles and catapults their electrons to a higher energy level. However, this energy is only released with a delay in the form of photons of certain wavelengths - usually after dusk.

The normal airglow is only visible from space, so alone cannot explain the bright nights, as the researchers explain. But their analysis of the WINDII data revealed that under certain conditions a locally increased airglow can occur. Thereby, flow waves in the upper atmosphere cause the excited gas particles to be temporarily concentrated in one place.

But is that enough to brighten the night so much in this place? To find out, the researchers reconstructed what happened using a physical model. And indeed: "If all four components of the zonal waves oscillate in one place in the same phase, then this can increase the emission rates of the Airglow tenfold or more over a period of days," they report.

Even if we no longer see the night glow due to the lack of darkness, it occurs somewhere on earth around seven percent of the nights, as Shepherd and Chu determined. Therefore, in a certain place there can be such a bright night even once a year. When this will happen, it could theoretically even be predicted with the help of atmospheric waves and their dynamics, the researchers say.

This could finally solve the centuries-old riddle of the bright nights. The irony of fate, however, is that this was achieved at a time when we were deprived of the sight of this fascinating phenomenon due to our light pollution. (Geophysical Research Letters, 2017; doi: 10.1002 / 2017GL074014)