The name is not very well known outside of China, and yet the announced IPO of Ant Financial is causing astonishment in the financial industry worldwide. Because if the parent company of the payment service Alipay dares to make the synchronous leap to the Shanghai and Hong Kong stock exchanges in the course of the year, the leading global stock exchange New York will come away empty-handed.

With the Ant Group, the financial policy decision-makers in the Middle Kingdom are emphasizing their independence from the USA and underlining that they want to compete even more intensely with the STAR segment of the Shanghai Stock Exchange for growth stocks of the US technology exchange Nasdaq.

The everything app - and much more

Alipay is omnipresent in China: With the app from the online giant Alibaba, customers pay in the small shop around the corner as well as in the posh boutique in the shopping center, for the delivery service of restaurants or for online purchases. In neighboring countries such as Japan, the Alipay logo is emblazoned on more and more shop doors and even in Germany shops and restaurants - for example at Frankfurt Airport - offer Chinese customers payment with Alipay. Alipay has so far been the fintech's most important source of revenue, and in future the Ant Group will target the financial sector

As the market leader with 900 million users, the electronic payment service from Ant Financial and its parent company Ant Group has a 55 percent share of the Chinese market. Number two is Internet giant Tencent's Wechat payment service.

But Alipay is not just an app with which you can pay bills via QR code, explains Holger Schmidt. "Alipay, the heart of the Ant Group, is much more than a payment service. Alipay is a 'super app' that hundreds of millions of people use to organize their digital lives. Shopping, entertainment, investments, education - everything takes place in one app", emphasizes Schmidt, who teaches network economics at the TU Darmstadt. "That only works with a clever platform model and that is exactly what makes the company so valuable."

And with an estimated value of more than 200 billion US dollars, the stock market aspirant is really valuable - even in comparison with traditional financial institutions.

Fintech in the fast lane

The US investment bank Goldman Sachs is currently "only" valued at around $ 75 billion on the stock exchange. The major American bank Wells Fargo, which has a third of all US households among its customers, currently has a market value of just over 100 billion dollars. And even in the home country of China, the Ant Group will move up to the upper class after its IPO. Their value would then roughly correspond to the market capitalization of one of the "Big Four" banks there, the state-owned China Construction Bank with around 15,000 branches and more than 200,000 employees. For comparison: Deutsche Bank currently has a market value of just under $ 21 billion.

Alipay is still the most important division of the Ant Group. In an interview with the US business television broadcaster CNBC, Ant Group top manager Eric Jing announced a year and a half ago that the core business in the future will be technology services that they want to sell to financial institutions such as banks.

Ant Financial has therefore been investing heavily in technologies such as blockchain, the system that became known through the cryptocurrency Bitcoin, for years.

Does this mean that Alibaba founder Jack Ma, who controls the Ant Group as the majority shareholder, is also pointing the way for other platform giants like Amazon? 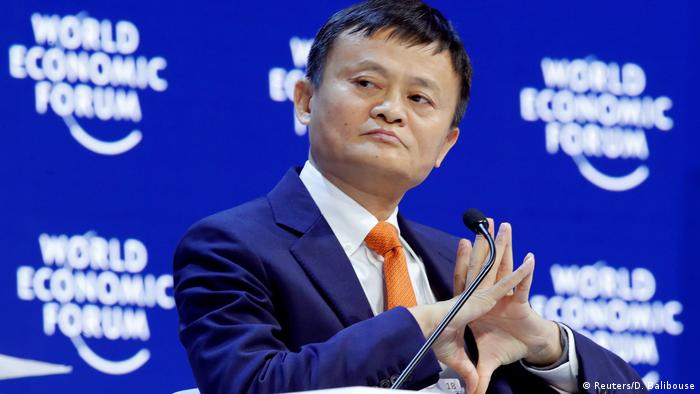 "Amazon has also taken some steps towards finance, for example loans for retailers, a credit card for private customers or insurance. However, Amazon certainly does not give top priority to this topic," says network economist Holger Schmidt.

By contrast, Eric Jing from Ant Financial left no doubt at the end of 2018 that Alipay was just the beginning: "Ant Financial was positioned as a technology company from day one. So far, however, we've only shown how technology can really be used to innovate We created examples to redefine financial services that people can feel and touch, "said Jing.

Network economics expert Holger Schmidt regrets that the IPO will only take place in Hong Kong and Shanghai. "The US president has threatened to deny access to the US stock exchanges for Chinese stocks. Some companies have reacted with a second listing in Asia. If the Ant Group now only goes public in Asia, that is of course also a political one Signal in the dispute between the two superpowers. What a shame, because an IPO in America would have been better for the company and investors. "