What is a composite generator

DC generator, Dynamo machine, a rotating power generator (generator) for direct current. The armature of the direct current generator rotates in a magnetic direct field generated by the current flowing through it Excitation winding is generated in the stationary part (column) of the machine. This induces alternating voltages in the sub-coils of the armature winding, which are removed with so-called brushes. As with a direct current motor, this alternating voltage induced in the armature is converted with the help of a commutator (commutator, collector) rectified so that the machine supplies direct current to the outside, although the current in the individual armature conductors constantly changes direction (is commutated, Fig. 1). The excitation of the magnetic field can be taken from an external voltage source (External excitation), or the machine can supply its own excitation current (Self-excitement, dynamo-electric principle, Fig. 2). In the latter case, if the excitation winding is connected in series with the armature winding (Main excitation), the excitation current is also the load current of the generator. In this case the field and thus the voltage of the machine, which is proportional to the product of speed and field, is strongly dependent on the load. This circuit is therefore rarely used. On the other hand, it is more common Shunt excitation, in which the excitation winding is parallel to the brushes and therefore receives a practically constant voltage. The still slight voltage change under load is often compensated for by an additional series winding with a few turns on the exciter poles (Composite generator, Compound generator, Double-ended machine).

The direct current generator can also be operated as an electric motor in the same circuit (direct current motor). Only any existing series excitation windings have to be reversed for this purpose. 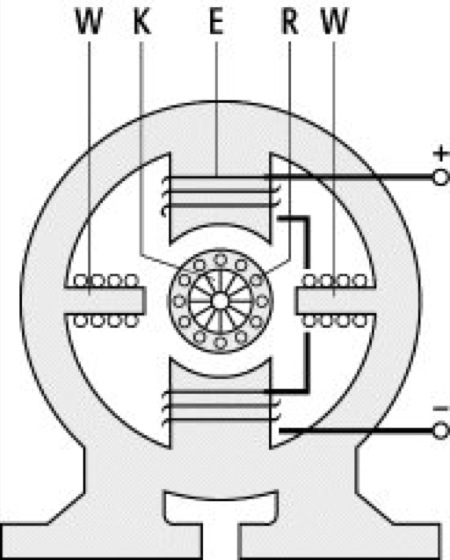