What are the salient features of NATO

May 8, 1945: Germany surrenders. Fascism has been defeated, the common enemy Germany conquered, and yet world peace is uncertain. The allied alliance begins to crumble. West and East recognize their opposition. The USA, the capitalist, democratic West, and the Soviet Union, the idea of ​​socialism and communism, are irreconcilably opposed to each other, terrifying each other.

The Americans are afraid of the Soviet expansionist drive, the incorporation of Eastern Europe. The Europeans fear a devastating nuclear war between the great powers on their continent. There is the optimal climate for the creation of a security alliance. On April 4, 1949, the USA, Great Britain, France and nine other states found the North Atlantic Treaty Organization (NATO).

NATO is the community of values ​​of Western democracies to protect against the Soviet Union. She is a child of the Cold War and the invention of nuclear weapons. The core of the transatlantic alliance is Article 5. Here it says: "In the event of an armed attack on one or more contracting states, the contracting parties agree that this attack will be viewed as an attack against all."

The enemy is lost 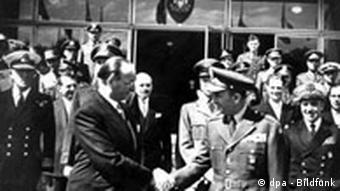 NATO is a defense alliance whose self-image focuses on collective action. The European states - Germany also joined in 1955 - clearly committed themselves to America and the USA promised in return the longed-for protection. They promised: to react to every attack on Berlin, Brussels or Paris as if it were an attack on Washington, Chicago or New York.

With the collapse of the Warsaw Pact, the defense alliance of the Eastern Bloc countries, and the decline of the Soviet Union at the beginning of the 1990s, NATO lost its image of the enemy and with it its original raison d'etre. A realignment was needed. Today the outstanding feature of NATO, which has meanwhile grown to 26 members, is its function as a framework for cooperation between Europe and the USA on security issues. 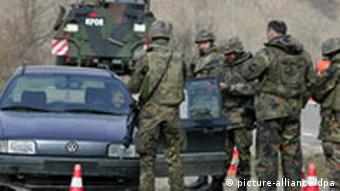 In addition to its own defense, NATO is increasingly involved in conflict prevention and is involved in global peacekeeping missions on behalf of the United Nations. The KFOR (Kosovo Force) ensures stability in Kosovo.

The US-led air war in Afghanistan in October 2001 did not take place within the framework of NATO, although the US officially requested the support of the allies under Article 5 of the NATO Treaty. After the end of the war, however, an International Protection Force for Afghanistan (ISAF) was set up to support the Afghan interim government.

In 2003 the US plans to invade Iraq led to a serious crisis in NATO: Turkey applied for defense systems in order to be able to defend itself against possible counter-attacks in the event of an attack on Iraq. But France, Belgium and Germany vetoed it. Only after some controversy did the states give up their resistance, so that in February 2003 NATO finally made military aid available to Turkey.

With the new US President Barack Obama, the days of internal NATO disputes should also be over. Americans and Europeans want to pull together again. The new challenges are terrorism, weapons of mass destruction and "failed states", ie failed states in which NATO wants to prevent chaos and anarchy. These tasks are to be mastered jointly, in close coordination with the European Union and the United Nations.