Why is the trucking industry cyclical

In fact, the truck market is being hit hard by the pandemic. Specifically, only 161,000 heavy trucks over 16 tons total weight were sold in Europe from January to October. That is a good third less than in the previous year. Truck manufacturers also have to cope with double-digit sales declines in other important markets such as North America and Brazil.

The result: In 2020, the industry's cumulative operating profits will collapse from 13.3 billion euros to five billion euros, explains McKinsey partner Bernd Heid. The industry expert sees hardly any signs of improvement at first. In Europe it will "certainly take until 2023" before the market for commercial vehicles will return to a level of 300,000 units sold, believes Heid. "A quick return to the pre-crisis level is not yet in sight," says VDA boss Müller.

Traton and Daimler respond with savings

Industry giants like the VW commercial vehicle holding Traton (MAN, Scania) or Daimler Trucks are threatened with a long dry spell, at least in Europe. The corporations are reacting to this with rigorous savings. The situation at MAN is particularly dramatic. The Munich people write deep red numbers. In the first half of the year there was a loss of more than 400 million euros.

Now the costs are to decrease by 1.8 billion euros per year. 9500 jobs are therefore available. Above all, the headquarters on the city limits of Bavaria's largest metropolis are to be trimmed. In Steyr, Austria, an entire plant is likely to be closed. At the same time, the Swedish sister brand Scania will also lose 5,000 jobs in the medium term.

Competitor Daimler Trucks does not mention any concrete reduction figures. Division boss Martin Daum makes no secret of the fact that the costs for the Stuttgart commercial vehicle leader are far too high in Europe. "When the markets are weak, we slide into the red too quickly and earn too little money to invest sufficiently in our products of tomorrow," said Daum recently explaining the gravity of the situation to his employees in an internal circular.

In addition to the corona crisis and homemade structural problems, the transformation of the industry away from diesel engines to electric drives is forcing a reduction in jobs. This is "unfortunately inevitable," wrote Daum to his employees. According to one extreme scenario, Daimler Trucks could even lose half of the 30,000 jobs at the truck locations in Germany by 2035. 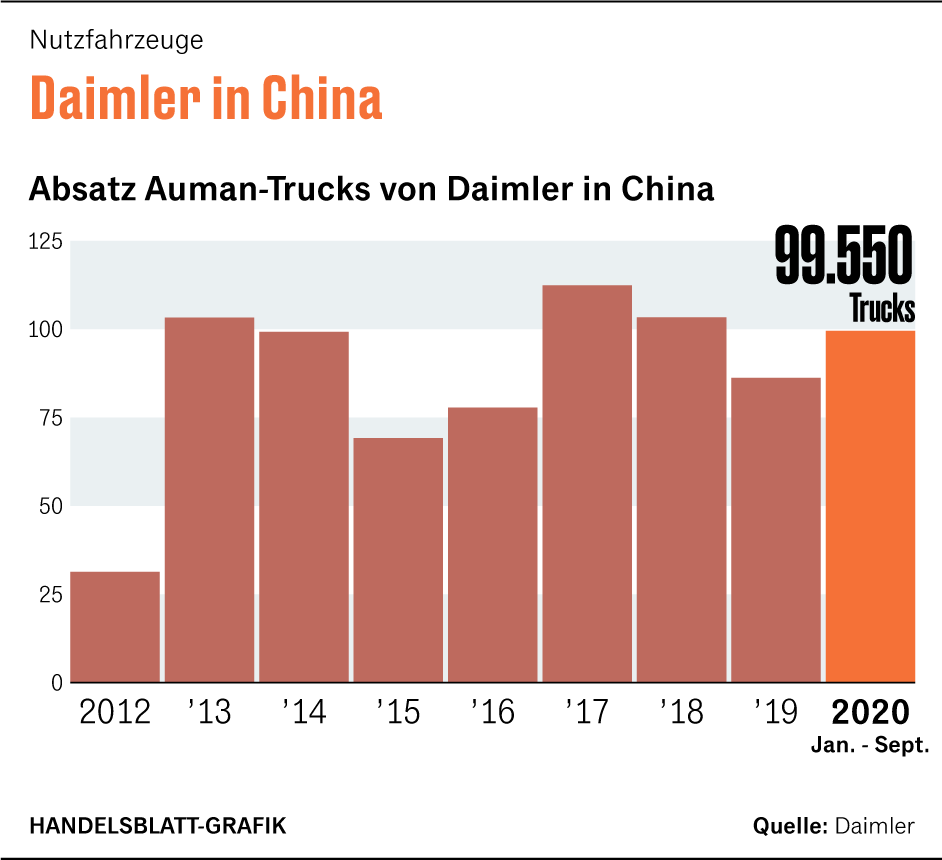 It is unlikely that this scenario will actually become a reality, as Daimler would then de facto no longer invest any money in its domestic factories, but it does show how great the pressure to adapt is currently in the truck industry. Of the 840,000 car jobs in Germany, more than one in five is attributable to commercial vehicle manufacturers, their suppliers and providers of trailers, bodies and carriers. "A crisis like the current one poses enormous challenges for companies," warns Müller. In many places there is a threat of deforestation.

Heavy goods traffic must get rid of diesel

The background to this is not least the ever stricter environmental regulations around the globe. For example, the EU is forcing truck manufacturers to reduce their CO2 emissions in their fleets by 15 percent by 2025 and by as much as 30 percent by 2030. Those who fail to meet these requirements can expect fines in the hundreds of millions.

The problem for the manufacturer: the diesel engine can hardly be further optimized technologically. In order to make heavy-duty traffic climate-neutral, the truck builders have to switch to battery and fuel cell trucks, which are currently still a subsidy business.

However, the industry has already achieved its first lobbying success. The Federal Ministry of Transport wants to promote climate-friendly drives in commercial vehicles from 2021 and is making more than 1.1 billion euros available for this. A further billions will be made available for the expansion of the refueling and charging infrastructure by 2023.

However, VDA boss Müller criticizes the fact that there is less money than the willingness to implement when it comes to charging infrastructure: "The rate of expansion is far too slow in Germany and a lot more in Europe." According to Müller, a charging network is needed in Germany alone for trucks that have at least 260 stations with 1200 charging points on the long-distance traffic axes. Germany is still a long way from achieving this goal. This is one of the reasons why the VDA boss sings the praise of the diesel. "We mustn't forget that we will continue to need modern diesel drives in many fields of application, especially in trucks," explains Müller. Because the diesel is currently simply more economical to buy and operate. That's true. However, the diesel could become almost entirely obsolete even in long-distance truck transport by the end of the decade.

According to McKinsey, the so-called Total Cost of Ownership (TCO) of a hydrogen truck should drop from currently around 1.53 euros per kilometer to 0.89 euros by the end of the decade. For comparison: the total operating costs of a diesel semitrailer truck should then be 0.92 euros per kilometer. This difference of a few cents may not seem like much - but in the hard-calculating truck business it is tantamount to a fundamental shift.

More:Daimler and Traton: German truck giants are pushing into China.