How does an antivirus work?

Malicious programs are becoming more and more complex, so that you are protected against a cyber attack you need an up-to-date antivirus program. Here's how this software works. 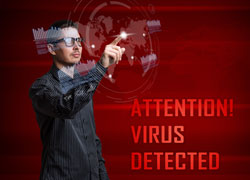 Surely each of you has heard of computer viruses - these days a virus only makes up a small fraction of all malware. Because worms, Trojans, rootkits, keyloggers and backdoors spread very quickly despite the installed security software. While the first viruses were still very small programs that only spread themselves and possibly caused minor damage. In the meantime, the multiple encrypted viruses and worms are very cleverly camouflaged in order to spy on the computer or personal data.

Since today Viruses, worms and Rootkits Encrypt and camouflage according to similar principles, it is difficult to make a precise distinction. However, they differ from Trojans in how they work. To put it simply, a Trojan horse is a program disguised as useful, which only serves the purpose of smuggling other malicious programs into computers. Trojans are comparable to so-called backdoor programs, which detect existing security gaps in the system, thus creating a "Back door" to open. Malicious programs such as keyloggers enter the system through these backdoors in order to secretly spy on users. In general, any kind of malware is also used Malware called.

An antivirus program should protect your PC and, above all, important documents and photos from malicious code and spy programs. It doesn't matter what kind of malware it is, because the way the antivirus software works is always the same.

As you can see, such a virus must first be recognized before it can be combated and removed. However, because of the permanent further development of malware and their sometimes insidious unpredictability, the development of a perfect scanner with 100% detection rate is practically impossible. The only thing that helps is a combination of several detection methods. In this way, the manufacturer of the antivirus software wants to guarantee a 95% hit rate.

A distinction is made between two techniques for detection:

The first method is signature-based recognition or reactive recognition. The simple virus, or better said the source code, is broken down by the antivirus software and scanned for malicious code. If the detection encounters a signature previously created by the manufacturer of the antivirus program, a virus is reported. Depending on the accuracy, which is guaranteed by different algorithms, advanced signature scanners with upstream transformers also offer very high detection rates.
»The advantages and disadvantages of signature-based recognition

Heuristic or behavior-based detection evaluates potential malicious programs based on their behavior. This so-called proactive detection is used in static and dynamic scanners (Sandbox technique). 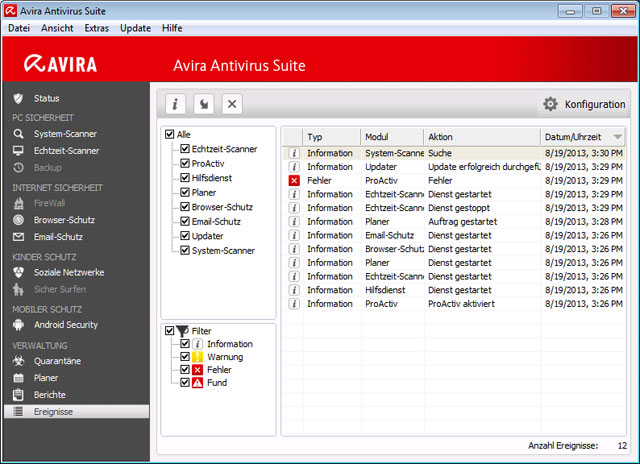 In the case of viruses that change their code each time they are reproduced, a new signature is created each time. The simple signature-based scanners no longer recognize these malicious programs, so that a transformer must be connected upstream. This "Freed" the code of additionally inserted byte sequences and thus restores the original signature required for recognition. The heuristic scanner detects new malware much faster than the signature scanner, but it also has a higher rate of false positives.

If the transformations become even more complex or if the malicious programs generate completely new code that will only be executed over several generations of the same malicious program. Then neither the signature-based scanner nor the static heuristic scanner is sufficient for detection. In such cases, the sandbox is used, which is a scanning process that is completely carried out by the actual computer sealed off becomes.
“How heuristic detection works

Protection functions of the anti-virus software

As you have learned through the various functions, a good antivirus program should not only have signature-based detection but also behavior-based detection. Because it can take a few hours for the developer to update the new signatures, which could lead to a total failure of your hardware. But once you have caught malware, like any malfunction or error, it must be fixed.

The following protective mechanisms are available to you for this, depending on the range of functions of the antivirus programs.

When buying the software, pay attention to functions that cover several areas. Above all, do not be fooled by other terms such as realtime scan (Real-time protection), Norton SONAR or Kaspersky Security Network (Cloud technology) unsettle. Because even with a PC system, it is only as secure as the weakest link in a chain and that is almost always the user himself.

Note!!!
Do not install a second antivirus program on your system, as this could not only hinder the two scan engines. But also deactivate it completely and your system is unprotected.

Most application problems with anti-virus software arise in connection with faulty updates or a non-updated virus database. Because only those who keep their antivirus program up to date can detect and remove new malware at an early stage.

But the real-time scan can also lead to system conflicts, as large databases are constantly checked and this slows down system performance. Even when starting the system, it can take a little longer with good antivirus software, as the program scans the system as soon as it starts up.

A complete crash of the antivirus software often occurs when the system resources are used excessively. This would be the case, for example, if you open several programs during a full system scan that knowingly consume a lot of system performance.