Why do my fingers curl

Crooked fingers - what's behind it?

With increasing age, some people involuntarily bend their fingers more and more inward so that they can no longer straighten them properly. In many cases the diagnosis is: Dupuytren's disease. But what does the term mean? 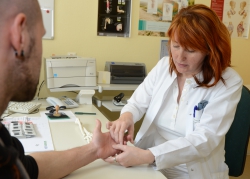 “Dupuytren's disease is a benign disease of the connective tissue in the palm of the hand. In the process, a benign tumor forms - usually in the flexible, soft area near the metatarsophalangeal joints - which over time prevents the affected fingers from stretching. The disease occurs in middle age, 85% of which are men. The cause is usually a metabolic damage. Because of this, liver damage, sugar disorder or thyroid disorder should be ruled out as the cause of Dupuytren's disease or, if there is a metabolic disorder, a medical treatment should be carried out by the family doctor. Smoking has also proven to be unfavorable for the course of Dupuytren's disease. There is also a strong familial accumulation ”, says Dr. Margit Rudolf, senior physician at the Orthopedic University Clinic Magdeburg.

Characteristic of the disease is the appearance of palpable knots and strands on the inner surface of the hand. Usually the fourth and fifth fingers (ring finger and little finger) are affected. A progressive progression of the disease that lasts for several years is typical. The growing strands can ultimately mean that the finger can no longer be stretched (retractions with stiffening, stretching deficit, flexion contracture). At this stage one speaks of the Dupuytren's contracture or contraction. The individual course is very different from patient to patient and can hardly be predicted. Dr. Rudolf: “The disease can come to a standstill, but it can also progress so far that patients with a major loss of function then decide to undergo surgical treatment. This involves surgical removal of the entire affected tissue, a so-called open fasciotomy. The operation should not be carried out too early, but only when the fingers are already unable to stretch (45 °) or when there is severe pain. Injections of bacterial collagenases (enzyme), which dissolve the scarred strands, are only in the experimental stage. One option is to irradiate the palm of the hand with X-rays. However, this can only stop the progression of the disease in the very early stages. ”In Dupuytren's contracture, different stages are distinguished, depending on the extension deficit (contracture), which is measured as a deviation from the normal position. 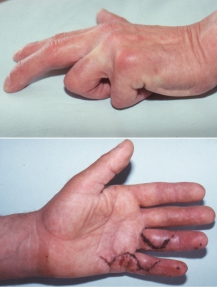 Complications after an operation can be superficial wound healing disorders and bruises. Rarely, a movement disorder of the whole hand accompanied by severe swelling and significant decalcification of the bones can occur. Furthermore, immobilization can restrict mobility in the wrist and other finger joints. However, this can be mastered quickly after physiotherapy treatment.

The disease has not yet been fundamentally curable. Treatment therefore aims to halt the progression of the disease or to improve the use of the hand. Since the disease is benign, it does not pose a threat to life, but rather a restriction of the - important - hand function. Important: Not all patients with symptoms of Dupuytren's disease require treatment. In old age, the nodules usually grow very slowly and are not a major handicap for many patients.

Photo above: Those affected with Dupuytren's disease can find advice in the orthopedic outpatient department.

Photo below: hand before and after the operation