In order for Kaspersky Internet Security Suite to run faster and more smoothly, you have to set the security level from normal to low under Settings / File Anti-Virus, which is detrimental to security. (See image) 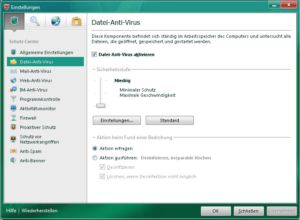 In my opinion, if you leave the default settings of Kaspersky Internet Security Mail Anti-Virus and Web Anti-Virus to “Normal”, you can live with the problem of lower security with File Anti-Virus. The vast majority of them will probably catch a virus via the web and that is what the Web Anti-Virus is for, in my opinion, which scans much earlier than the File Anti-Virus. So why should you scan the data twice? As I said, this option is at the expense of security and if you can live with the fact that it is a little less security, you will notice that Kaspersky Internet Security is no longer so slow and no longer slows you down.

If the system often reaches its limits, like with a netbook and the CPU load often goes towards 100%, you should check Settings / Advanced Settings under Compatibility, the function “Release resources for other programs”. This function is useful when Kaspersky Internet Security or Kaspersky Antivirus is putting a heavy load on the computer and thus slowing down other programs, for example during virus scans. 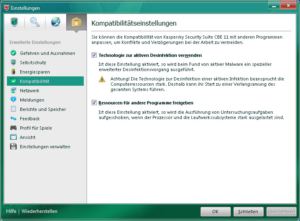 If you don't work with USB sticks or only use your own USB stick, you can change the function “Examine removable media when connected” under Settings / Examination. I switched from “Ask for action” to “Quick investigation” since I almost only use my own USB sticks and SD cards, I'm almost certain that I won't have a virus there. If you are quite sure, you can also use "Do not scan" there, but you have to know that there is no virus scan and where possible a virus, trojan, etc. can lurk. 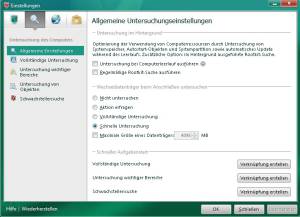 I am also happy to use the Settings / Advanced Settings "Threats and Exceptions" function. Exceptions, i.e. programs, directories or entire partitions, can be excluded there. These programs, directories or entire partitions are then excluded from the entire Security Suite or from the set module, i.e. not checked. Of course you will notice that because the Kaspersky Suite will then be much faster. 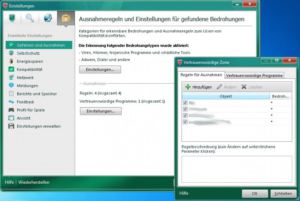 As you can see, Kaspersky has built in a couple of functions with which you can accelerate Kaspersky, you just have to consider that various changes to the standard configuration are at the expense of security. Often you can increase the performance through various functions so that Kaspersky Internet Security or Kaspersky Antivirus work faster on older laptops, PCs or a weaker netbook, the system does not slow down so much and the system runs more smoothly.