Utah is all Mormon

The God State of Utah: Among the Mormons

The accounts and legends of the Mormons are part of the history of Utah. The sect's flagship is the sacred precinct in Salt Lake City. 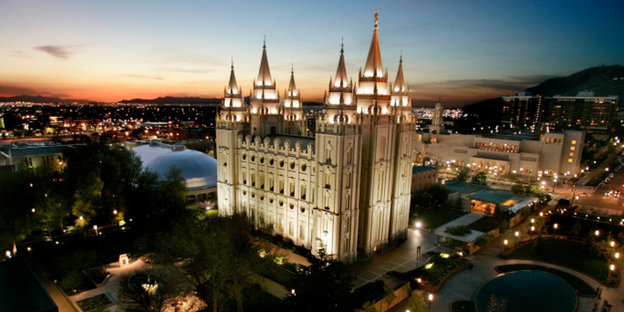 Salt Lake City's Temple Square is humming. 21,000 Mormons have attended their 179th general conference in the Utah capital. Well dressed, fresh and neat, they swarm back and forth between the different and cleanly shiny buildings during the conference breaks: there is the large temple, there is the tabernacle with its "tabernacle choir", there is the visitor center with the monumental statue of Jesus under the midnight blue Sky tent and its many exhibitions.

Almost the entire north side of the sacred precinct in Salt Lake City, however, is taken up by the gigantic Conference Center, which is planted with trees and flowers on its 1.5-acre roof.

To get there, participants from all over the world have to cross North Temple Street. And there they meet a small but noisy opposition: “Shame on you!” Shouts a fat, by no means neat protester. “Ask me why you deserve hell!” It says on his t-shirt.

The ladies look much more cute next to the screamer. They are all dressed in the style of the early 19th century and carry a plaque around their belly with their name, age (14 to 58) and the number of wives of Mormon founder Joseph Smith - 34 are believed to have been.

There are also a couple of husbands. Windsor Lyon, for example, the "polyandrous husband of Sylvia Sessions Lyon", the 8th wife of Smith. “Ask my story?” Asks the fake Windsor, and we learn that in real life he is a “born-again Christian” and has not shied away from the long journey from Dakota to express his displeasure with the Mormons.

For their part, they walk peacefully past the demonstrators into the center to listen to the speeches of their presidents. Incidentally, one of the leadership troika since 2008 is Dieter F. Uchtdorf, a former Lufthansa chief pilot. Uchtdorf gives a speech about the “love of God” that doesn't sound much different from what could echo from any Christian pulpit. Family, love for one's neighbor and for God: nothing a good Christian could have anything against.

History: The history of the State of Utah began with the founding of the Deseret State of God in 1847 on the shores of the Great Salt Lake. It was there that Brigham Young, the successor of the murdered first prophet and discoverer of the Book of Mormon, John Smith Jr., had led the Mormons and founded the capital, Salt Lake City. For a long time this area was considered "Utah Territory" - named after the Ute Indians who live there. It was not until the Church of Jesus Christ of Latter day Saints (LDS) renounced polygamy in 1890 that Utah became the 45th state to join the Union in 1896.

Polygamy: The LDS, the largest Mormon community based in Salt Lake City and with approximately 14 million members worldwide, no longer practices polygamy. A number of fundamentalist groups consider this to be treason and continue to practice polygamous ways of life.

Reading tip: A good representation of the fundamentalist Mormons in particular is offered by: Jon Krakauer, "Murder on behalf of God. A report on religious fundamentalism" (Piper), Munich 2004

And yet - the Church of Christ of Latter Day Saints (LDS) is something very special, and Utah, its homeland and homeland, cannot be understood without it.

A journey through the state between the Salt Lake, Rocky Mountains and the Colorado Plateau is therefore always a journey through Mormon land. So it happens that Neil Wilkinson shows us Temple Square.

The burly man is a chef by profession, but he is also a Mormon - in the fourth generation. He is currently organizing the various catering offers in the Temple area.

On the top floor of the Joseph Smith Memorial Building - with a sublime view of the temple - we get decent salads, good meat, but - "sorry" - no coffee.

The Mormons reject it like cigarettes and alcohol. Anyone who talks to Neil quickly realizes that one can get along very well with the Mormons as a "gentile" (which means "non-Mormon" here).

He does not do missionary work, he is friendly, fun-loving and tolerant. You can chat with him about anything, even about Adam and Eve, in whom he, there is no wavering, believes one on one.

But Neil does not agitate, he is gentle and tender like the steak that he has served here. For him, Temple Square is simply the well-run figurehead of his church and a tourist attraction. Everything from the exhibitions to the genealogy archive to the concerts and film screenings is free.

And every visitor gets two young female “missionaries” as companions who explain everything, including them without any missionary efforts. According to the Book of Mormon, the Holy Spirit is responsible for knowing the truth.

Neil gives us a Book of Mormon and he introduces us to “Sister Günther” from Augsburg and her colleague from Mexico. Both do their voluntary missionary service here. Sister Günther does not want to deny that the conference is a good marriage market.

Where else do you have so many brothers and sisters in spirit? Neil's wife is also Mormon, by the way, and we will find many more such couples - with women in particular who maintain and control Mormon family traditions and the values ​​of the Church.

That's what Jim Fauver, the 49-year-old manager of Castle Valley Ranch, 300 kilometers south of Salt Lake City, tells us. The three-storey main building in the log cabin style, built by himself, stands next to two lovingly restored pioneer houses in a wild and lonely area of ​​the Colorado Plateau, near the slowly sleeping mining town of Emery. Jim is the ranch manager.

This also includes the organization of the cattle farm - after all, 8,000 cows that he has to tend with his cowboys and drive them up the mountains and then back down into the desert-like plains twice a year on the “cattle drive”.

The ranch is owned by 83-year-old Glendon Johnson, a successful president of various insurance companies, but also a born cowboy and Mormon - like Jim, with whom we eat the huge cowboy steaks on the first evening at the ranch.

Over good red wine - he drinks Diet Coke - he tells how, after an eventful life as an architect, tax collector, computer specialist and barman, his Mormon wife retrained him to become a hardworking, good family man.

The result is the beautiful ranch, on which everything goes smoothly and where Jim has even created a large pond. “If you don't smoke, don't drink and are otherwise moderate, what else should you do but work?” He explains the Mormon attitude to life and grins.

The cows, the 80 horses, all of which were bred here, and last but not least, the guests, benefit from the godly life.

The next day, when we took Jesse Allred, the 39-year-old cowboy and horse whisperer, on a day ride through the exciting landscape that is repeatedly criss-crossed by canyons, we get to know the liberal western version of the Church of Jesus Christ: the "Jack Mormon".

"Only at the command of God"

Jesse chews tobacco, drinks beer, occasionally speaks “dirty language” and has earned his living as a “bull rider” at rodeos for ten years. He is not quite as devout as his "brothers", but he has raised many beautiful horses and trained them so that even a greenhorn like the reporter can easily get his horse "Rockstar" to "spin", a daring-looking pirouette.

Jesse shows us the ancient Indian drawings on the Rochester Panel and the high, steep cliffs with the fantastic view down to the open land. At the end of the day we are even allowed to drive a little cows.

Even after 500 westerns, it is a strange feeling to suddenly be faced with a herd of 40 gawking cattle. But “Rockstar” knows what to do and how to get the cows running.

When we were discussing the peculiarities of the Mormon worldview with Jim over dinner, the self-confident cook Bonnie came out of the kitchen to join the discussion. She heard we asked about the founder of the religion, Smith's many wives.

Bonnie tells us that Prophet Smith entered into these marriages "only at the command of God and with the greatest concern." Jim adds that it was also about protecting single women and mothers.

Nobody would suspect the two of polygamism, but we notice the problems the good Mormons have with their tradition and their public image.

Bonnie doesn't mind that there are only (old) men in the upper bodies of the LDS. For them, the Mormon women are the backbone of the Church: "The men are better for representing and organizing, we women take care of the important things like family, upbringing and so on."

Mormons conquered and built this country and they shape it to this day. From the wide and sleepy streets of Salt Lake City to the ranches and attractions like Zion National Park.

One of its peaks is called Mount Moroni. In 1827 Joseph Smith received the gold plates from the angel Moroni containing the original text of the Book of Mormon, which he translated into English - with two "seer stones".

Believe it all or not, the ancient reports, legends, and dogmas are part of Utah's history such as the Ancestral Pueblos, the Ute, the Paiute, and the Navajos. They also shaped Utah and you can learn a lot about them here (in the meantime). But this is another story.