Electrons in atoms and molecules

Free electrons can have any speed - in other words, they can have any energy. (We will now refrain from restrictions imposed by the special theory of relativity, which, as is well known, forbids speeds that are higher than the speed of light.) It looks different when an electron is in one atom located - here it is forced to be very specific Energy states or Energy levels to take. This is often imagined visually as if the electron were moving on certain orbits. However, this picture is very simplified because electrons are quantum objects and as such do not move on clearly defined orbits. The location of an electron is not given by such a trajectory, but by a spatial probability distribution - as Orbital designated. (And not all orbitals are spherical.) Each orbital represents an energy level. If an electron is to pass from one energy level to another, it has to absorb the missing energy or give up the excess. Since the electrons can only occupy the specified energy levels, i.e. can only switch between them, they can only absorb or release very specific energies - namely those that correspond to the difference between two energy levels. (Unless they are given enough energy to completely escape the atom - the so-called ionization energy. Energies above the ionization energy can have any value.) The energy to jump to a higher level can pass through electromagnetic radiation, but also through collisions with free electrons. An excitation via shocks occurs, for example, in lightning (weather) or in the lightning between the electrodes of the Wimshurst machine (Wimshurst machine).

CaptionLeft: If an electron absorbs an electromagnetic wave (wavy line) with suitable energy, it can jump into an energetically higher orbital. (For a clear illustration, I have taken the greatly simplified picture of the electron trajectories around the atomic nucleus.)
Right: If the electron falls back to an energetically lower orbital, it sends out an electromagnetic wave of the same frequency

However, there may still be energy gaps between the bands that cannot be filled. 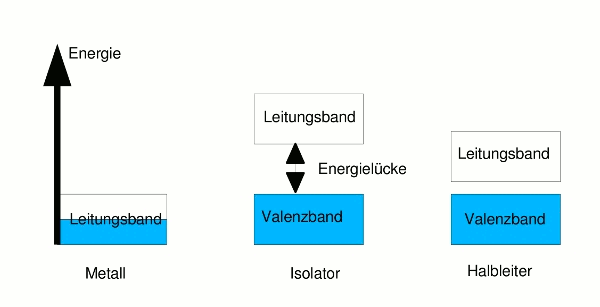 In a normally conducting metal, the energy states of the electrons are so close together that they can be viewed as continuous. In the electrical conductor is the top one Energy band not completely occupied, above a certain energy (called Fermi energy) all states are still free. The electrons can jump into these free states with very little energy and move easily through the material as an electric current when a voltage is applied. Therefore, the valence band also serves as a conduction band (what this band is usually called), both are fused into one band.
What happens now at Superconductivity? A normal electrical conductor has an electrical resistance. This means that the electrical current loses energy, which has to be constantly supplied to it by the electrical voltage. The resistance comes from defects in the lattice structure and the heat movement of the atoms. The heat movements in the solid body consist of oscillations of the atoms around their lattice positions, with these lattice oscillations (Phonons called) the electrons "collide". This means that the resistance in metals increases with temperature because the heat movement increases. (In semiconductors this is a little different, because there is the second effect that the number of electrons that manage to jump into the conduction band increases with temperature. This increases the number of available charge carriers and the current strength increases with temperature .) This comes about because a characteristic of metals is that they easily give up their outermost (some also the two outermost) electrons. These “swim” almost freely between the atomic bodies (one speaks of the “electron lake”) and are therefore easy to move.
Conversely, the heat movement decreases with falling temperature. With some materials this means that below a certain temperature, the Transition temperature, the heat movement is so small that the phonons no longer hinder the electrons. On the contrary, the influence of the electrons on the atoms can now get out of hand - these are electrically negatively charged, while the atomic cores have a positive charge due to the lack of electrons. As a result, an electron attracts the atomic core. In the case of strong heat movement, this effect is irrelevant because the alignment of the atoms is immediately destroyed again. However, if the atoms are more or less still, the attraction is noticeable by the electron and can propagate through the solid as a wave. So it is the electron that causes an oscillation, a phonon. The now aligned (polarized) atoms can in turn attract another electron. In this way, they ultimately convey the attraction of the first electron - a bond has been created between the two electrons. This electron pair is called Cooper couple.
What this results in can no longer be clearly understood. An electron has a half-integer spin (the spin can be thought of as a rotation around itself, it is an angular momentum). A pair of two electrons therefore has an integral spin (zero counts as an integral). Particles with half-integer spin are called Fermions, those with integer spin are called Bosons. Both types have different behavior: Fermions must not have the same properties in any of their properties. One consequence of this is, for example, that only one electron can sit in each energy state. Bosons, on the other hand, are not subject to this restriction; any number of them can be in one energy state. Since all particles and bodies always assume the lowest possible energy state (balls always roll downwards), all bosons gather in the state with the lowest energy. (Fermions also have to go to higher ones when the lower ones are already occupied.)
Since the Cooper pairs now have spin 0 (rarely also 1) and are bosons, they all gather in the lowest energy state. So where previously the energy band up to the Fermi energy was occupied, now only the lowest state is occupied. This creates an energy gap around the Fermi energy, the energy band splits.
In order to destroy the Cooper pairs, an energy must now be supplied that is at least as high as this energy gap. The energy of the heat movement of the atoms is no longer sufficient for this. These thermal lattice vibrations no longer have any influence on the electrons, they no longer hinder the flow of current. The electrical resistance is zero, the solid is superconducting. Superconductivity can be canceled by increasing the temperature, i.e. by increasing the heat movement of the atoms, or by applying a magnetic field.
With the so-called High temperature superconductivity the circumstances are still unclear - it is now assumed that Cooper pairs are also formed here, but the way in which the bond between the electrons is transmitted is still unclear.