DW: Why do Trump's German roots play a role when it comes to better understanding what is currently the most promising possible presidential candidate for the Republicans?

Gwenda Blair: His grandfather Friedrich Drumpf emigrated to the USA in 1885 at the age of 16. That was during the great wave of German immigration to the United States. His family were winemakers from Kallstadt. The first step in understanding Donald Trump today is knowing that his grandfather didn't want to be a winemaker. Nor did he want to be a barber - he was trained to be a barber when he announced that he did not want to grow wine.

He came to New York, learned English, went to the West Coast, ran restaurants there and created a financial cushion. Then he went back to Kallstadt, married a girl from the neighborhood, and brought her back to New York. However, she was so homesick that they went back to Kallstadt and Friedrich tried to become German again - he had meanwhile accepted American citizenship. And whether it was planned or not, he just got around military service. He was a little too young before leaving and a few months too old when he returned. 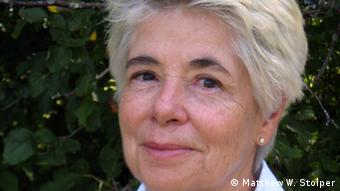 Drumpf claimed it was a coincidence. The German authorities did not believe this, however, and made sure that he was not allowed to return to German citizenship. They called him a slacker, expelled him and sent him back to where he had come from: the United States. This is why the Trumps became Americans despite everything, rather than just a German family with a grandfather who spent a few years in the United States.

What qualities did Donald Trump inherit from his grandfather and father - and how do they affect his career?

The Trumps are a formidable slap of people who will do whatever it takes to move forward and win. They are all incredibly persistent, never give up, and are ready to push the envelope and find potential loopholes.

Grandpa Trump built his restaurants on land that did not belong to him. That was during the Klondike gold rush, in the times of the Wild West. It was a rough time when many single men were desperately looking for gold - and prostitutes. Grandfather Trump's restaurants offered liquor, food, and women. On the side walls there were small niches with heavy curtains, so-called private rooms for women. It was clear to everyone that these were prostitutes. Trump's establishments were certainly no exception during this period, but he has benefited a lot. Later, when he returned to Germany, he claimed in his application for re-naturalization that he was a quiet man who avoided pubs.

Friedrich's son Fred was particularly good at finding loopholes. He was a real estate agent doing business on the outskirts of New York City. When he was asked to build government-funded houses, he founded letterbox companies and eventually rented bulldozers and trucks from himself. And at inflated prices. It wasn't illegal. But it went to the limit of what was allowed. He was extremely good at that.

And Donald Trump was also very good at discovering loopholes and stretching rules, for example in the construction of the Trump Towers in New York. He hired undocumented Polish workers to demolish the building that previously stood there. He paid very low wages and made sure they slept on the construction site so they could keep to the tight schedule. He later claimed he didn't know they didn't have papers. It couldn't have escaped him.

Against the background of the Trump family history, how do you explain Donald's negative attitude towards immigrants - including the toxic rhetoric?

Trump is always sure who his audience is. I don't know whether this can be called a German characteristic, but part of the family culture has always been a close look at the target group. His grandfather knew exactly who he built the Klondike restaurants for. Trump's father also knew exactly who he was building the New York suburbs for. That's not something we would associate real estate magnate Donald Trump with today. It was about residential houses for the middle class. But Fred Trump added certain extras for the would-be clientele. For example, an additional closet. He was very good at marketing.

And Donald is also an exceptionally good marketer of his chosen target group. In this case it is the great mass of unhappy and sometimes angry Americans who think: "Our country was once great, but now it is no longer and someone else is to blame." They want someone who can fix everything and give them the respect and prosperity they think they deserve.

Trump is a master at positioning himself as a champion of these people and he has no trouble conveying that he will take action against anyone who wants to prevent this. Be it immigrants, war heroes like John McCain, a woman like Fox presenter Megan Kelly or a hedge fund manager. Targeting immigrants is easy when targeting the large number of frustrated white voters in the United States.

So for Trump, his family history does not contradict his attitude towards immigrants?

I think contradictions have never bothered him. This is quite confusing for observers of his campaign, but Trump is politically broad and does not bother him. He used to be a Democrat, now he's a Republican. Today he is conservative, before he was liberal. Back then he was in favor of the right to abortion, now he has rowed back. He was in favor of immigration reform. Now he's against it. It moves smoothly between positions. I think his family background is the least of his worries.

Gwenda Blair is the author of the books "Trumps: Three Generations That Built an Empire" and "Donald Trump: Master Apprentice". She teaches journalism at Columbia University.

The interview was conducted by Michael Knigge.