What makes or defines a superhero 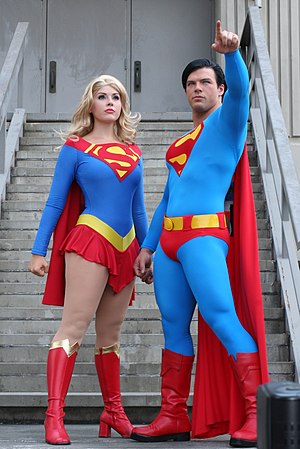 It is called cosplay when someone dresses like a well-known character. These two are Supergirl and Superman.

Superheroes are characters from comics, films, and other media. A superhero has special powers, unlike normal people. Those who have super powers can, for example, fly, look through walls or lift very heavy things. But there are also superheroes without such powers: They become strong thanks to training and technology. Superheroes are good, the bad guys are called super villains.

There were already strong heroes in the legends of antiquity, such as Odysseus, or in the adventure stories after 1800, such as Robin Hood. The superheroes as we know them today date back to the years after 1930. One of these heroes was Superman: he first appeared in a comic in 1938.

Some superheroes like Batman have experienced crimes and therefore fight the evil in the world. Often times, the superheroes still live a normal life as a simple person. Superman, for example, is an alien who also works as a newspaper reporter. Spiderman, on the other hand, is a young man who dresses up when he goes on the hunt for criminals.

Many superheroes were invented in the USA or Japan. Cartoons soon appeared, and then films with real actors. Today there are two main companies that own the most famous characters: Marvel and DC. Movies about these characters appear quite often these days and attract a lot of viewers.

There are also other search results for “Superhero” from Blinde Kuh and Ask Finn.