This application is programmed in HTML5 and is therefore also suitable for use on mobile devices. 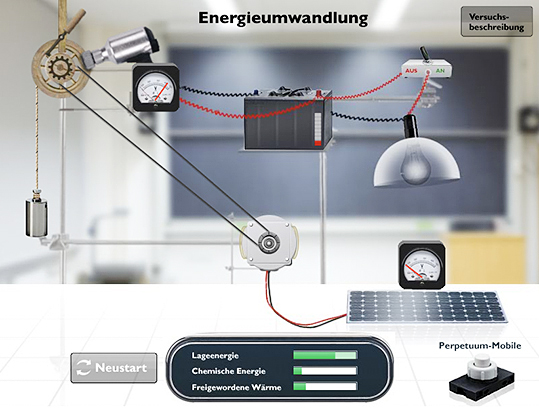 The experimental setup in the interactive laboratory invites you to research. How much of the potential energy is converted into chemical energy and vice versa? What is the heat released about?

Welcome to the energy laboratory!

Here in the laboratory, different forms of energy can be converted into one another. The weight is pulled all the way up at the beginning. As soon as you turn the wooden lever (top left), the rope unrolls. The weight loses height and drives a dynamo in the process. The resulting current charges the accumulator.

Only 55% of the kinetic energy of a dynamo is converted into electrical energy. 45% is given off as heat.

The switch (top right) closes the circuit between the battery and the lamp. The light from the lamp shines on the solar cell, which in turn drives the motor. This will crank the weight up again. Then the lever can be thrown again so that the weight drops down again and sets the dynamo in motion ...

Using the scales, potential energy, chemical energy and the heat released can be compared with one another in real time.

You can also try out how the behavior of the devices changes when you press the "perpetual motion machine" switch - unfortunately, such a switch is not possible in reality.

A car engine converts chemical energy stored in gasoline into kinetic energy - in theory it's very simple. In fact, a lot more happens: the engine warms up and the car generates exhaust gases and noise. In other words: thermal energy remains in the engine; the exhaust gases contain heat and kinetic energy and energy escapes from the engine along with the sound waves - these are actually undesirable forms of energy. 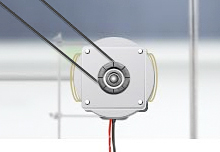 An electric motor converts 70% of the electrical energy into kinetic energy. 30% of the energy is released in the form of heat.

And that also happens with other energy conversions: A solar cell, for example, is supposed to convert radiant energy into electrical energy - but this only works with part of the radiant energy, the rest ends up as heat. And even if the energy is only to be transported, not all of the energy arrives at its destination in the desired form: Electrical cables heat up, and part of the electrical energy becomes warm on the way. Axles rotate in axle bearings - here, too, frictional heat is generated and the rotational energy decreases.

The energy is not lost in the process, but 100 percent of it does not arrive where you would like it to be. The percentage of the energy invested in a device that actually comes out in the desired form is called the Efficiency of the device. For a gasoline engine, for example, it is around 20 percent. 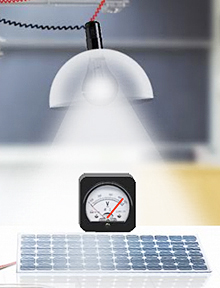 With a conventional incandescent lamp, the energy loss is particularly large: only 5% is converted into light energy, while 95% is lost in the form of heat.

It would be nice if you could "capture" the remaining energy and convert it into the desired form. Unfortunately, this is not possible with heat, because heat has a disruptive property: All forms of energy can be completely converted into heat - but energy that is present in heat cannot be completely converted back into another form of energy. There is always a non-convertible portion of heat and the energy it contains. This energy is still there, but it can no longer be used in any other form - it is worthless. By converting it into heat, the energy is devalued.

Often one speaks instead of "Energy devaluation"Also from" energy consumption "or" energy loss ". Strictly speaking, that's not entirely correct - after all, the energy is still there, just in a form that can no longer be used in any other way.

There are a number of things that can be done to devalue as little energy as possible: Build more streamlined cars with less air resistance, polish surfaces so that there is no friction, equip axles with ball bearings and lubricate them with grease or oil. But how far can energy depreciation be avoided? Can you build a device without any friction?

Such a machine could run forever, so it would be a Perpetual motion machine - and it cannot exist either. Because you cannot completely prevent friction from occurring. A little bit of kinetic energy is constantly turning into heat - and it cannot be completely converted back. In the course of time, more and more energy becomes heat, until at the end all the energy is in heat and the machine stops.