What would Obama miss most as President?

Bye-bye, Barack! Why the web will miss Obama 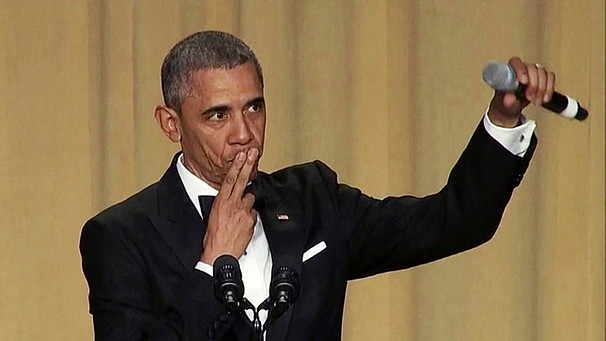 Eight years of Barack Obama. That also means: eight years of terrific online performance. And especially there we will miss him. Barack Obama, America's first black president and the first internet president. He discovered Twitter for himself, hung out on Reddit and made the most beautiful dub remixes on YouTube. Some stiff politicians can learn something from this.

In his first election campaign in 2008, he understood where people can be reached: on social networks. It's hard to believe that he was still on MySpace at the time. But that's okay - that was still a thing back then. Since then, Barack Obama has always been up to date, on Facebook and Instagram, and he even tweets in person at @POTUS. Pretty close to the people.

And as I said: pretty good. These eight Obama moments should stay in the memory of the Internet community.

1. The most retweeted photo of all time

That is, almost. In 2012, Barack Obama celebrated his re-election with his wife Michelle. The result was this photo, which has been shared over 800,000 times on Twitter - a record! At least for a while. Because almost two years later, Ellen DeGeneres tweeted the famous Oscar selfie. A few more people shared that. Namely over three million. Well Peanuts.

2. The most romantic and musical president ever

Speaking of Michelle: Barack Obama is arguably the most romantic man there has ever been in the White House. He is the dream of all - democratic - mothers-in-law, has just used the kisscam to make out with Michelle in front of the whole nation, and has played Al Greene's famous song line "I'm so in love with you" during a speech. That had to do with the fact that he had to think of his Michelle and not because he happened to be giving a speech at the Apollo Theater in Harlem, where singer and preacher Al Greene once performed.

Obama also demonstrated his singing talent at the funeral of a victim of the shooting in Charleston. There he intoned "Amazing Grace" during a speech and everyone joined in - pure goose bumps! And suddenly the mood wasn't so sad anymore. Instead, life was celebrated.

3. The best punchline supplier ever

"Barack's Dubs" will also remain unforgettable. Okay, Obama didn't sing to them himself right now. Fadi Saleh, a student at the University of Tennessee, produced the cool music videos and published them on his YouTube channel since 2012. But Obama delivers the best punchlines in his speeches, without which "Barack's Dubs" would never have been possible. Absolute highlight:

4. The most network-savvy president of all time

And because Obama really understood how to deliver online without being embarrassed, he also cooperated with BuzzFeed. The result is this Facebook video, with which Barack Obama advertises the state health insurance.

5. The coolest talk show guest ever

Obama's numerous appearances on American late-night shows quickly became a global hit. The action when he had talker Stephen Colbert shave his head was legendary:

In the end, Stephen Colbert was actually bald. The background was that Colbert paid a visit to the US soldiers and also wanted to "play" a soldier. Not bad when the Commander in Chief himself arranges his new hairstyle, even if everything was agreed beforehand, of course.

Barack Obama knows how to do it - not just online but also offline. For example, when he greeted Kevin Durant, USA national basketball player, with this cool handshake:

7. The weirdest handshakes ever

But you also have to say: Unfortunately, not all handshakes were that cool. Thanks to Barack Obama, we've seen the weirdest handshakes ever. It doesn't matter whether it's a strange looking "threeway shake" with the Canadian Prime Minister Justin Trudeau and his Mexican colleague Enrique Peña….

... or in Cuba with President Raúl Castro.

Well, to be honest you also have to say: It wasn't Barack's fault that the handshakes went so badly. Of course not. Because even if he has not achieved everything politically that he set out to do, Barack Obama is and remains the President of the Internet.

Finally: the funniest (and truest) follow-up bash ever

That too comes - of course - from Noch-POTUS himself.
Because who should follow Barack Obama? Donald Trump? Come on.

And Hillary Clinton will have a tough time too, because Obama was already having a lot of fun with her social media skills at this year's White House Correspondents Dinner:

Oh, Barack. The Internet will mourn when it reads on January 20, 2017, the day the next American head of state is sworn in: