ESKIMO Kunststoffteile GmbH was founded in 1978 in Landsberg am Lech. Edmund Schnappinger, pioneer of the German white water kayak, fulfilled a dream and turned his hobby into a profession. Here he benefited from his craftsmanship and technical know-how, which word quickly got around in the then still small scene. 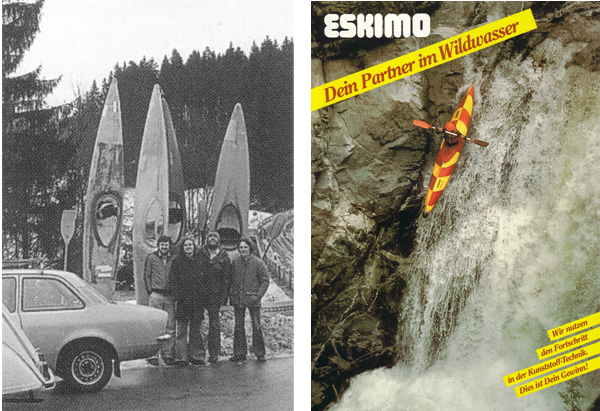 At the end of the 1970s a white water kayak was four meters long, and so ESKIMO surprised the white water scene in 1979 with the only 2.20 m long boat - the ESKIMO TOPOLINO. The TOPOLINO was the pioneering white water kayak of the following years, ESKIMO was able to set itself apart from the masses of competitors as a manufacturer and break new ground. 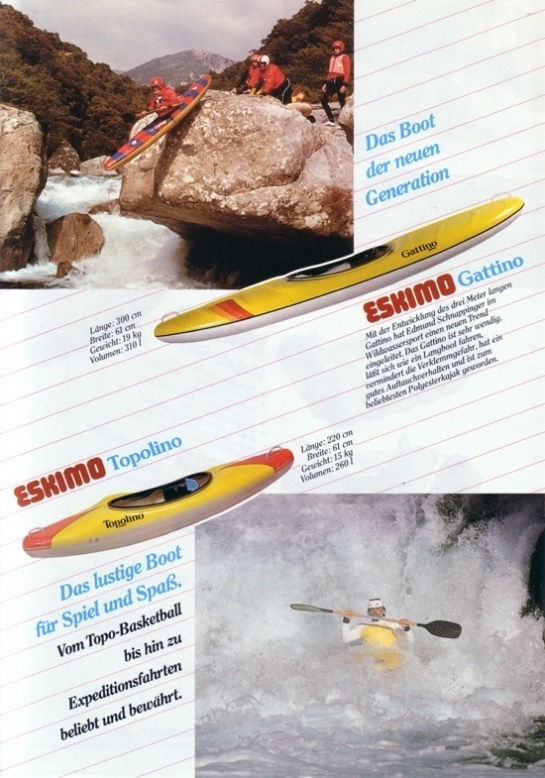 After the other manufacturers slowly recognized the advantages of small and agile boats, ESKIMO brought out the next revolutionary development in 1983. With the introduction of the GATTINO, the 3-meter compact class of white water kayaks was redefined.

For a long time Edmund Schnappinger saw the main disadvantages in the production of the then common rotation process (see technology) of the kayaks. However, it took until 1984 before ESKIMO kayaks could be manufactured using the complex and more expensive blow molding process, which had a significant positive impact on weight and design. During production, the material was also improved and high molecular weight polyethylene (PE-HMW) was used. This enabled a better and weight-optimized design, more sophisticated models, longer product life cycles and guaranteed higher intrinsic value. Since then, ESKIMO kayaks have been considered indestructible.

The breakthrough from ESKIMO

The blow molding of the kayaks represented a milestone in the history of the ESKIMO brand, brought the ultimate breakthrough in the scene, and the ESKIMO brand finally became a cult. In 1988 the TOPO-DUO was developed, the first two-person kayak that was fully suitable for whitewater. 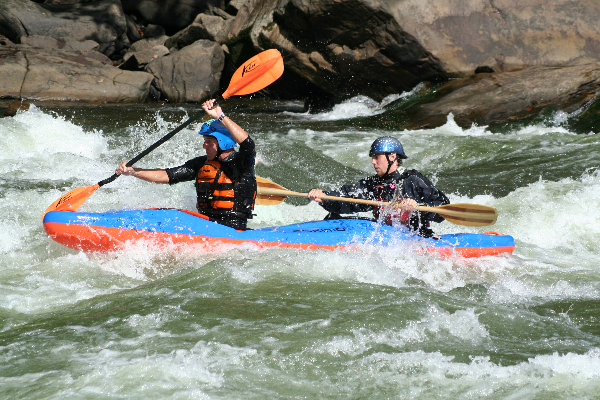 Since the mid-80s, the canoe rodeo as a discipline in white water paddling has developed enormously, has become a crowd-puller due to the spectacular moves, and has been renamed - Canoe Freestyle. In 1991 Jan Kellner became the first world champion in freestyle. The so-called “godfather of rodeo” came to ESKIMO in 1994 and was in charge of marketing and product development.

ESKIMO established itself as a manufacturer of high-end kayaks for drivers who want a reliable boat suitable for everyday use, as well as for drivers who need a professional boat for extreme conditions or expeditions.

For example the ESKIMO DIABLO, which was developed in 1995 and enables an excellent technical driving style. The DIABLO impresses with its optimal emergence behavior and a stable position in the water. Thus, the DIABLO became an absolute all-rounder in whitewatering, with which even technically difficult passages can be mastered and freestyle moves are possible.

The revolution - the KENDO

In 1996, another kayak was added to the ESKIMO range, and in its first year it became an absolutely successful boat. The KENDO turns fast and booft easily, has balanced alpine characteristics and very good ascent behavior with enormous safety reserves. This year five ESKIMO-KENDO riders finished in the first ten places during the Freestyle World Championships in Augsburg.

Meanwhile, ESKIMO developed the next sensation in kayaking. In 1997 the ESKIMO-CERRO, an adventure kayak, was released, the world's first boat with COEX technology. This meant a further development step for ESKIMO. The company RIKUTEK from Altenkirchen in the Westerwald was found as a reliable production partner (see technology).

In the following years, all products were very successfully revised on the basis of new developments and technologies. In 2000 and 2001 ESKIMO developed the first alpine kayak, the SALTO, which integrates the flat-bottom construction of a rodeo kayak into that of an alpine kayak. The SALTO has proven itself as an extreme kayak for every extreme possibility. In the next few years, ESKIMO spent a lot of time developing new boats, which resulted in the SPEEDO, XENO and LUPO boats.

Edi Schnappinger, the founder of ESKIMO, withdrew from the business in 2005 and ESKIMO was integrated into the water sports division of RIKUTEC Kunststofftechnik GmbH & Co. KG. In the next few years, RIKUTEK expanded the product range and made technical changes. In 2010 the company RIKUTEC Kunststofftechnik GmbH & Co. KG stopped production due to capacity bottlenecks.

In 2014 ZISTCO GmbH took over the rights for the production and international sales of the brand name ESKIMO. After technical changes and further developments, ESKIMO kayaks will be available on the Internet from spring 2015. It continues on the road to success with four further developments of well-known and successful kayaks.

The TOPO-DUO and LUPO models come back in their tried and tested design. The quality of the ESKIMO SALTO is being revised in order to provide the drivers with an even more robust boat. The ESKIMO KENDO will also be available in a new design. All models are expected to be available from April / May 2015. The exclusive online distribution enables the best price for the customer !!!